It is well known that invasion of ‘natural’ vegetation communities by non-indigenous plants (commonly termed ‘weeds’) significantly threatens native vegetation diversity and ecological function. It is widely assumed that restoration of native vegetation can be facilitated through weed removal, but it is clear from recent evidence that removal of a weed alone is unlikely to restore resident ecosystems. Indeed, it has been estimated that as little as 20% of management activities are quantitatively evaluated for community responses to weed removal. More often than not, ‘positive conservation outcomes’ are evaluated in terms of how much biomass of a particular weed is cleared from a particular area, with little consideration given to the degree to which the community regenerates once the weed has been removed.

At the start of this year I began an investigation on the patterns of native vegetation responses to weed management, in collaboration with ecologist Kris French and human geographers Nicholas Gill and Natalia Adan from the Australian Centre for Cultural Environmental Research (AUSCCER) at the University of Wollongong. My project is couched within and complements an overarching study on the complex social and cultural drivers of weed invasion and management systems across rural landscapes

My specific project will examine whether and how native wet sclerophyll vegetation regenerates in response to removal of the thicket-forming shrub Lantana camara (lantana) by private residents across semi-rural and forested landscapes of south-eastern Australia. This will be achieved through detailed vegetation censuses across a diverse array of vegetation plots from which lantana has been removed, as well as reference invaded and relatively intact patches dominated by native forest. (I am a bush-pig at heart and have a rollicking good time when rummaging around forests, collecting data on plant communities – if you fancy being pinged with photos of a bearded boy head-deep in lantana, covered in ticks, leeches and scratches but exploring the most extraordinarily beautiful landscape, follow me on Twitter @GoodenBen…).

Does time heal all wounds, or only at some places some of the time?

Fundamentally, I expect that the plant assemblages that emerge once lantana is removed will be richer and more structural diverse than those present in lantana-dominated patches of vegetation. Indeed, I have been shocked at how rapidly native plants (grasses, sedges and forbs in particular) recruit into plots once lantana is removed (see image below, taken before and then only four months post removal)! I will survey vegetation along a chronosequence of lantana management (before removal and 1 to 20 years post removal) to determine the temporal scale over which native communities recover from invasion. 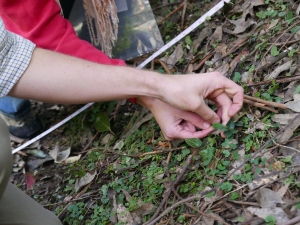 However, it is clear from recent evidence that the patterns of community regeneration in response to weed management is moderated by at least three key attributes: (1) mechanism by which the weed is removed (see classic example here), (2) landscape context and (3) ‘resilience’ of the community to invasion. For instance, we are finding that lantana is removed either mechanically (sometimes using heavy machinery, such as tractors and slashers) or chemically, and I anticipate that the pattern of vegetation response will differ between these two control methods. Disturbance of the soil, through mechanical removal, may activate seeds stored within the soil and facilitate native plant recruitment. Alternatively, mechanically-controlled sites may become dominated by secondary weeds, as a result of soil disturbance, which inhibit recruitment of native species… we do not know what to expect, but I predict nonetheless that these two modes of weed management will have divergent trajectories of native vegetation restoration. Other methodological factors that may influence how the vegetation recovers post invasion include: how long was lantana present prior to its removal? How much lantana was removed, and how often; once only, or were follow-up treatments used to prevent it from re-establishing? How many practitioners participated in the removal programme?

Likewise, we are finding that lantana removal is conducted across a gradient of vegetation cover within the landscape matrix, and I anticipate that each managed site’s landscape context will moderate patterns of community regeneration post lantana removal. Sites embedded within a forested matrix are likely to contain a diverse and abundant suite of plant propagules within the soil seed bank and higher rates of visitation by avian frugivores than sites located in extensively cleared landscapes. Will forested sites thus experience faster rates of vegetation regeneration once lantana is removed compared to managed sites with little residual vegetation in the surrounding landscape?

My overall aspiration, therefore, is to determine optimal regimes of woody weed management with regards to promoting native vegetation regeneration across invaded landscapes. Through extensive vegetation surveys, coupled with complex general linear mixed models, I will attempt to develop a model of vegetation regeneration, based on where, when and how lantana has been removed, as well as landscape attributes and functional traits of the native plants themselves.

Weed management is as much a function of the people who engage with the weed as the native vegetation that are impacted by the weeds. I wish to acknowledge the fabulous work that my colleagues Nick Gill and Natalia Adan are doing on working with local land managers and private custodians on weed management systems and landscape change. I’m a bush boy who is still grappling with objective realities versus entangled ontologies, but I am learning to be more open to understanding how ecological and human cultural systems  are entangled, not separate – and I thank them for this opportunity to play a part in their research.

4 thoughts on “Weedy woes and ecosystem rehabilitation – what are the biophysical consequences of woody weed management?”