Lantana camara is undoubtedly one of Australia’s (and arguably the world’s) most destructive invasive plants. Research that I did during my honours found a clear negative association between lantana abundance and native plant recruitment and species richness within wet sclerophyll along the southern coastline of New South Wales (see publications in Biol Cons and FEM). 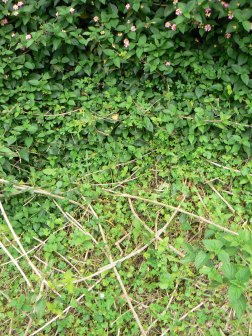 There’s a huge amount of research out there now on the mechanisms by which lantana impacts native plant community diversity (for example, see work by Gentle and Duggin). There is very little research available, however, on the capacity for the vegetation community to recover following lantana control.

I conducted a weed-removal experiment in 2007 within lantana-invaded turpentine forest at Macquarie Park National Park, to examine the effects of lantana invasion and two methods for its control on rates of tree seedling establishment and growth. There were two lantana-removal treatments used in this study: (1) mechanical removal of above-ground lantana biomass ONLY and (2) mechanical removal followed by the application of herbicide (Glyphosate) to cut lantana stems. This second removal treatment is the standard, intensive control measure used by bush regenerators when restoring sclerophyll forest infested with lantana. However, many bush regenerators (myself included!) are averse to using chemicals, prefering to instead mechanically remove lantana only from sensitive sites.

A single native tree seedling (nine species in total) was planted in the centre of 2 m x 2 m plots from which lantana was removed and their establishment and growth monitored monthly for one year. I also examined whether native seedling responses to lantana invasion and removal treatments varied across native tree functional groups: (1) upper canopy sclerophyllous trees of the genera Eucalyptus and Syncarpia, (2) subcanopy mesophyllous trees, such as Syzygium and Synoum and (3) species typically recorded in disturbed canopy openings or along forest edges (e.g. Trema and Acacia species). 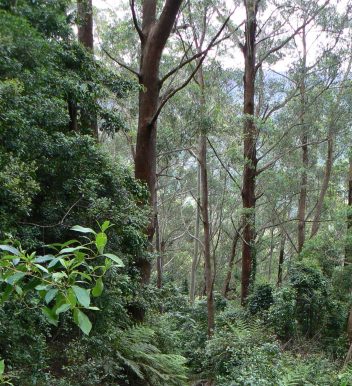 I found that lantana invasion and removal had no effect on rates of seedling mortality. However, upper canopy species were significantly less likely to survive overall than subcanopy or disturbance-adapted species. Importantly, seedlings which survived the growing season were significantly larger (measured by height, basal stem width and number of leaves) in both plots dominated by native vegetation (i.e. without lantana) and where lantana’s canopy was removed and its basal shoots poisoned than in lantana-dominated plots. Furthermore, seedling growth was inhibited in plots where lantana canopy was removed but where herbicide was NOT applied to its cut basal shoots!!!

Overall, my results are not surprising and confirm the wealth of experimental evidence that already exists on the impacts of lantana and other woody invasive plants on the regeneration of native vegetation. However, my results clearly show that mechanical removal of lantana alone is unlikely to promote the regeneration of native vegetation without the application of appropriate herbicides to cut stems. 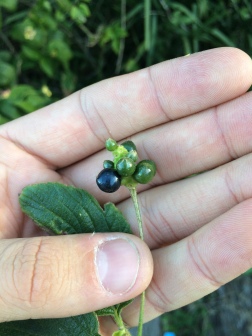 Many bush regenerators, myself included, are hesistant to use herbicides to control weeds in ‘sensitive’ bushland, and prefer to mechanically remove both above-ground shoots and below-ground roots to control woody weeds, such as lantana. It is highly probable that mechanical removal of both lantana shoots and roots would indeed lead to a similar positive outcome for seedling recruitment as the herbicide treatment used in my experiment. However, mechanical removal of lantana roots probably disturbs the soil and promotes vigorous secondary invasion by other weeds present within the soil seed bank. Many of these are benign and transient opportunists (e.g. Conyza, Bidens and Sonchus species), but others are often more difficult to control than lantana.

I am in the process of preparing this paper for submission to Ecological Management & Restoration. Please get in touch (bgooden@uow.edu.au) if you would like further information about this project and my research on invasive plants in general.